Blessings Of A Non-pictorial Nature 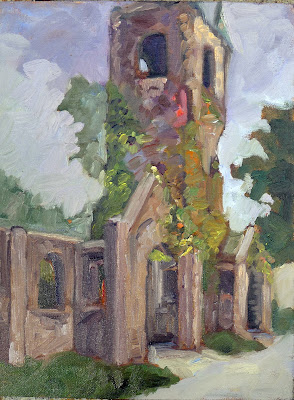 Let's get the sketch out of the way, first. No, it's not very good, but that
is small potatoes compared to the experience of painting it.It’s embarrassing to admit, but prior to this weekend I’d never spent any time in Corn Hill, which contains Rochester’s best-preserved collection of 19th century houses. I’ve driven through it, but to look at it, photograph it, or paint it—no, I’d never done that. So on Friday and Saturday, I spent a little time in lovely Lunsford Park.
Lunsford Park was laid out in 1837. It is surrounded by architectural gems, including a block of brick row houses, the Greek Revival home of canal engineer Col. Henry Cody, and a magnificent Second Empire rectory. There are two churches on the Circle as well: Immaculate Conception Catholic Church (1864) and the ruins of a lovely Medina sandstone gothic facade. 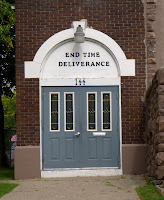 The sandstone stripe marks the
end of the old, start of the new.This ruin is what everyone assumes they know about the history of the American church. A proud Richardsonian Romanesque-style Methodist Church, its membership had declined to unsustainable lows by 1969. The departing Methodists gave the building to an AME (African Methodist Episcopal) congregation. It then suffered several suspicious fires, the last (in August, 1971) being the disaster that did it in. The AME congregation followed the example of its Methodist predecessors and  withered away. They built a plain and functional sanctuary behind the surviving sandstone walls. Then they left too. Now it houses something called the End Time Deliverance Miracle Ministry, which has no internet presence and as far as I can see isn’t part of any denomination.
It seemed like there was nobody there: it appeared to be a squat barn of building (albeit very neat) with a hopeful name on a sheet of plywood above the door. A bit out of place in the lovely stillness of Lunsford Park, but it’s only a few blocks from Plymouth Avenue, and next door to it is an empty lot where a former city school stood. 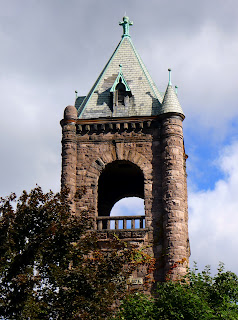 I like churches and I like their buildings. I wandered around the circle for a while, looking for a subject to paint, but I kept coming back to this pile of stone. I looked at the memorial plaque to Dr. Charles Lunsford (1891-1985, Rochester’s first black physician), scuffed my feet through the falling chestnuts, took a few arty shots of the gazebo, and talked about our kids with a man sitting on a park bench, who—it turns out—is a member of End Time Deliverance.
He told me he was taking a cigarette break from handing out free clothes.  For the first time, I noticed the steady stream of people coming and going from a back door, toting full black plastic garbage bags over their shoulders. He told me he remembered the fires, and that he’d played in the old church as a kid (a rather poignant story I heard several times that afternoon).
In my more sophisticated moments, I understand that painting ruins is (in our day and age) a trope to be avoided at all costs. But there’s something about the wrecked face of this church that I love. It reminds me of my childhood church, Delaware Avenue Baptist Church. The ivy glowed green, orange and red against the violet sandstone walls, and pigeons called across the autumn afternoon. I know better, but I was seduced. 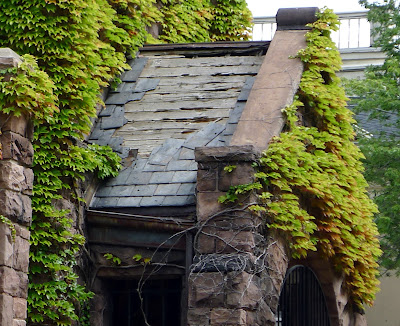 I set up on the hatchback of my Prius so I could look straight up at the tower. This is a foreshortened view and, frankly, I did a pretty poor job of drafting. But perhaps that’s because I spent almost the whole afternoon talking. As I mentioned, men were handing out clothing and coffee to the neighbors. A little boy was there with his Daddy, working on repairs. The praise band finished practicing. The sound guy finished adjusting the sound. Teen girls finished their dance practice. The ladies of the church were off somewhere else witnessing, but when they finished, several of them stopped by. (“I still gotta check on them,” one of them told me, and as a blue-haired church lady myself, I totally understand that.) 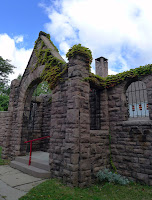 One man spent quite a long time telling me about the church's outreach, which includes summer picnics for the neighbors. At one point the conversation moved to race and faith. “I don’t see why it matters,” a man told me. “Black, white—we’re all one church.” And then he invited me to join them on Sunday (which I would have done, except that my husband was playing in a praise band elsewhere).
How many times have I driven around Buffalo’s East Side and lamented the death of the old churches that once proudly hosted German or Polish Catholic congregations? Under that surface decay, are they doing more of God’s work than ever? Conversely, how many of the beautifully-maintained faux-Tudor churches in the suburbs and countryside are dying from inside?

I would love to return and paint this church’s portrait, because it's a portrait of an elemental truth: it's not just that appearances can be deceiving—they almost certainly are deceiving. But to be honest, I don’t have a clue how I’d start to depict the beating heart inside this old ruin. Any suggestions? 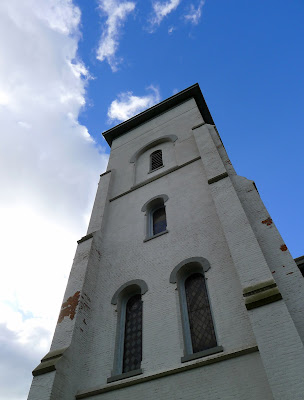 Immaculate Conception isn't unscathed either;
its steeple was hit by lightning and ruined.