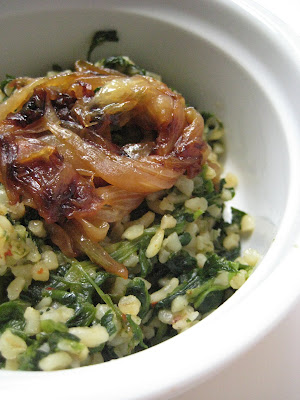 I like bulgur pilafs as light summer lunches , because they are easy and quick to make, and if cooked with olive oil, can be eaten cold or warm. Bulgur Pilaf with Spinach and Fried Onions recipe is introduced as a rural Arab recipe by Paula Wolfert in The Cooking of the Eastern Mediterranean. I decided to try it, because it reminded me of a Turkish pilaf recipe with white rice and spinach. It is a really tasty, refreshing recipe with a nice twist of fried onions. It goes well with red meat and/or yogurt. 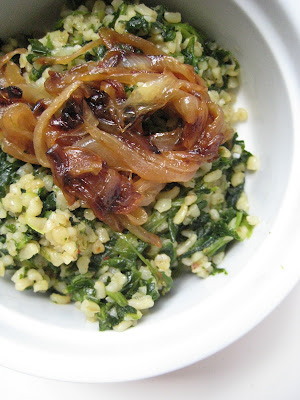 -Heat 2 tbsp of olive oil in a skillet and cook the onions on high-medium covered, stirring frequently, until they are golden brown.
-While onions are cooking, heat 1 tbsp olive oil in a pot and add spinach to wilt approximately 5-7 minutes depending whether it's fresh or frozen.
-Once spinach is wilted, stir in bulgur, stock, salt, and spices. Cover and cook over low until it soaks all the stock or bulgur is tender.
-Remove bulgur from heat and let stand, covered, for 5 minutes.
-Stir in the fried onions.


This recipe is for a bulgur recipes event held over at Deryadan Lezzetler.http://mostly almost turkish recipes/www./atom.php