Deathwing: From Black To Bone? 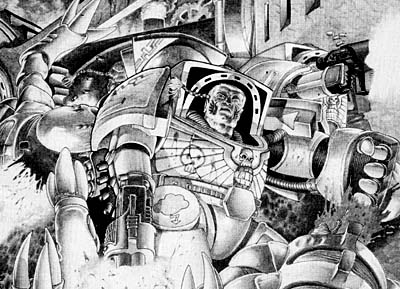 Image from GW, Space Hulk Deathwing expansion set
Starting my Deathwing army has given me the opportunity to do some research as to when they actually changed from black armour to the bone color we all know them as having. While this may not be of much interest to non-Dark Angels players, it was interesting to try and piece together a history for these guys with the little information available out there.

With the opportunity to rebuild my Deathwing now that I have sold my previous one and currently have no army, I decided I would do a little research into them. I wanted to know when the Dark Angels first company changed from Black to White (or bone colored) armour.

Why? Two reasons. First, I wasn't really sure when it happened and second, because I was contemplating building an earlier time period force and wanted to get the colors and armour types accurate.

I had some huge post here that went into all kinds of details and such, but it got off track. The short version is this:

I started with the story of Two Heads Talking. This was published in the Deathwing expansion for the first edition of Space Hulk. Without going over the whole story in detail, it talks about a group of Dark Angel terminators who go to their recruitment world only to find it infested by Genestealers. They set about cleansing it and succeed. Two Heads Talking is the name of the Librarian who kills the Genestealer Patriarch.

As a ceremonial gesture, they decide to paint their armour white (the color of death) prior to undertaking the task. This was done in remembrance of their tribal ancestors who painted their bodies the funeral color white prior to going out to seek vengeance against a rival tribe for killing a small child and they did not expect to return due to the overwhelming odds they would be facing.

But when did this happen is the real question. They don't give a date in the story, but do give enough other information so that if you put that story in context with everything else out there, you can figure about out when it happened.

As best I can figure, it happens sometime during or after M36.
But reading the story, we learn a couple of things.

The term "Deathwing" was not used to describe the Dark Angels 1st company before this point. It was simply the name of the drop ship they used to get to the planet. It was large enough to hold around 30 terminators so that makes it bigger than Thunderhawk transport I believe. What size ship exactly, I don't know. Before this point, I believe the 1st company was simply known as the first company like every other Chapter. They had not adopted the name "Deathwing" for themselves just yet. 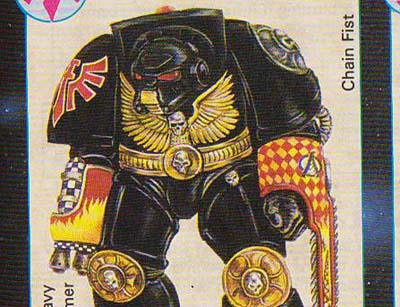 Image from Warhammer 40,000 Compendium
We also know they still wore the black armour at the time of this event. As an additional note, the broken sword was not their "icon" either. They still had the complete sword as all the other members in the chapter had. Their's was painted red instead of white though.

So I'm left with a decision.
Do I paint them the bone color or do I go with black?

Painting them black would date them sometime before M36 but after the Heresy. Before the adoption of the broken sword as their icon and the bone colored armour. They would be the original tough guys.

Lots of people have the bone colored version and they are instantly recognized for who they are as well. Remember that painting quiz I gave you all a while ago?

The bone/white would give me a chance to do some great work with some subtle shading and such, but black would be an even harder challenge I think. The models would really be carried by the details.

So let's hear it folks, what do you think would look "better" on the table, the classic bone color or the rarely seen black version?