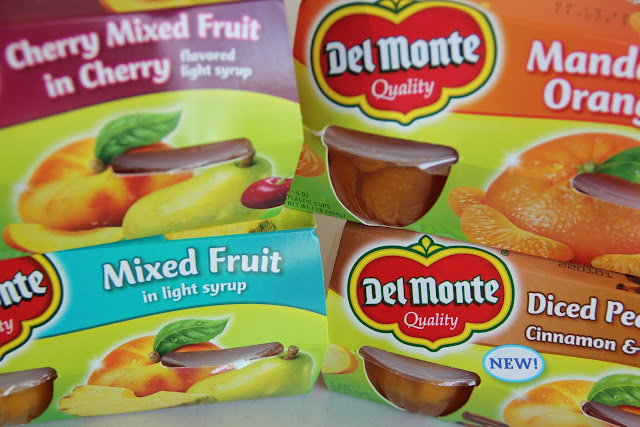 If you peeked inside my pantry, you would always find a wide selection of Del Monte fruit cups. Both of my kids love them and we have found many creative ways to enjoy them as well. Oh, yes, you can always just hand us a spoon (fruit is a fabulous snack on its own), but there are many fun ways to dress them up as well.

I love going out for sushi, but my kids have PKU and can't eat meat, fish, etc. So I wanted a great after school snack they could enjoy with me using our favorite fruit while still giving a nod to to my favorite Asian food. 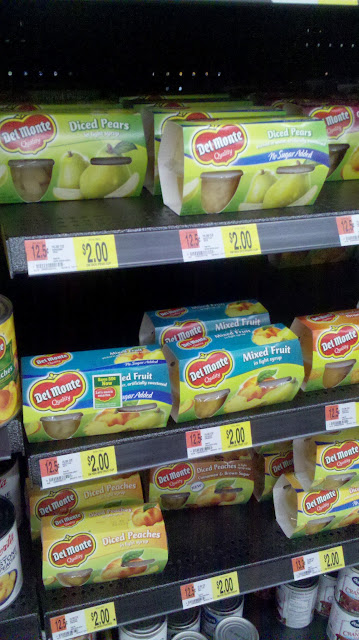 We headed down to our local Walmart to pick up a few different packs of Del Monte fruit cups. You can see my entire shopping experience in my Google+ album. I love the selection there and $2 is a great price as well. My kids love the Diced Peaches, Mandarin Orange segments, Diced Pears and especially the Cherry Mixed Fruit in Cherry Syrup. Do your kids have favorites?

I love trying out new recipes and since my kids tried and enjoyed coconut rice I thought this would be a great addition to my fruit rolls and hand formed rice 'sushi'. I know, sushi means vinegar-flavored rice, but I am going to make a stretch with culinary creativity. To compliment the Del Monte fruit, I think it worked well. 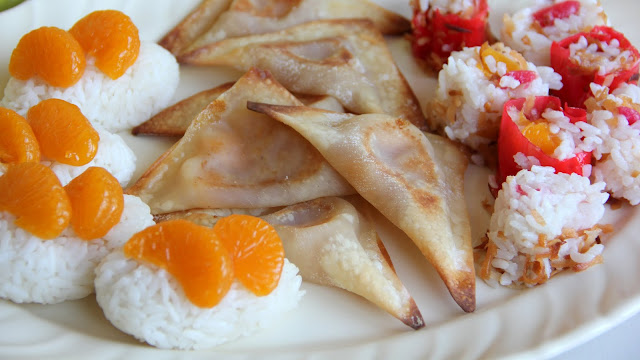 I have three great recipes to share with you today, all tested and kid approved! I made hand formed Mandarin Orange Fruit Sushi with Coconut Rice, Baked Spiced Peach Won-tons, and Coconut Rice Rolls with Mixed Fruit. Sushi is a hands on activity, since these are just with rice and fruit this would be a great activity to do with older children

First make the Coconut Rice. I used this for both the hand formed and rolled sushi.

Coconut Rice
You Will Need:

1 cup dry Japanese sticky rice1 can light coconut milkwater, enough to add to the coconut milk to equal 1 1/3 c. or the amount suggested by your rice cooker1/4 cup sugar2 Tbsp. coconut cream
Make rice as directed by the package or your rice cooker substituting the coconut milk, water and sugar for the usual water. Let cool slightly, cool enough to touch, then mix in some coconut cream to help hold the rice together. Form as desired and allow to cool completely before serving. 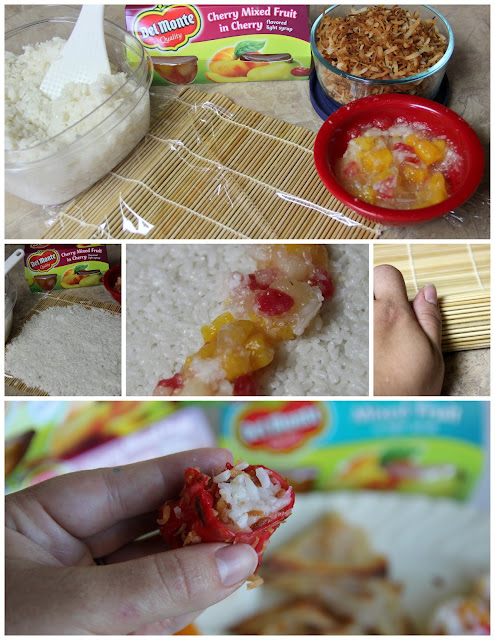 Coconut Rice Rolls with Mixed Fruit
You Will Need:

Coconut Rice1 Cherry Mixed Fruit in Cherry Syrup fruit cup1 Tablespoon clear jell (thickener)toasted coconut2 Fruit Roll-UpsI use a sushi rolling mat, but any heavy cloth placement could work. Put down kitchen wrap and then a Fruit Roll-Up. Spread a thin layer of rice over the roll-up. Mix clear jell with the fruit cup. Clear jell works as a thickener like corn starch, but doesn't need to be heated to be activated. Spread a thin strip of fruit mixture in the middle of the rice. Fold one side over and press. Then start to roll the rest of the way, gently pull back the wrap as you roll. Press firmly to compact the rice so it will hold its shape. Roll in toasted coconut.
Sushi cutting tip: Leave the plastic wrap around the sushi as you cut it. Using a sharp knife, saw gently back and forth trying not to compress the roll. Between cuts rinse the knife. 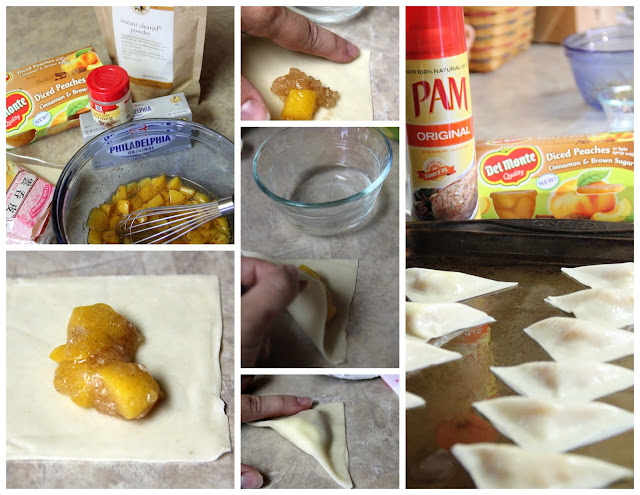 Won-ton wrappers1 Diced peach with cinnamon and brown sugar fruit cup1 Tablespoon clear jellcream cheese* optionalCinnamon for dusting the topsPreheat the oven to 400 degrees. Spray a baking sheet with nonstick spray.
Mix the fruit cup with the clear jell. Add a teaspoon to the middle of a won-ton wrapper. Seal the edges by placing a little cool water on a finger and tracing 2 sides. Fold over and press to seal. If you want, add a 1/2 teaspoon of cream cheese to the won-ton before sealing. Place filled won-tons on the baking sheet and spray the top with more cooking spray. Dust with cinnamon. Bake for 10 minutes, turning half way through. Let cool slightly before serving. 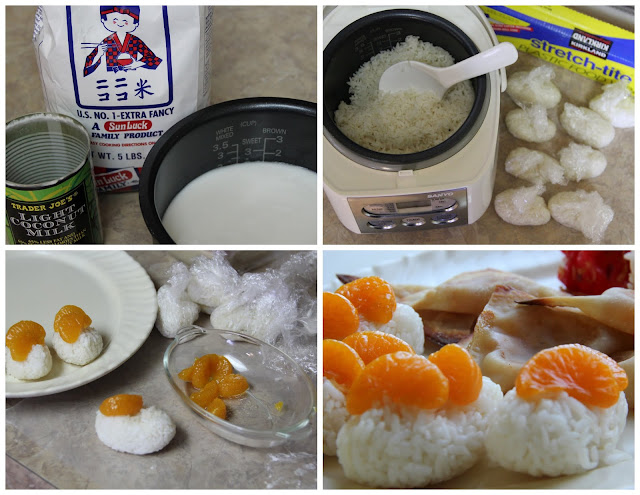 Coconut Rice1 Mandarin Oranges fruit cup, drainedWhen the rice is still warm place a little kitchen wrap in the palm of one hand. Place a few tablespoons of rice in the wrap and form by hand. Press the rice firmly so it will hold its shape. Top with mandarin orange segments. 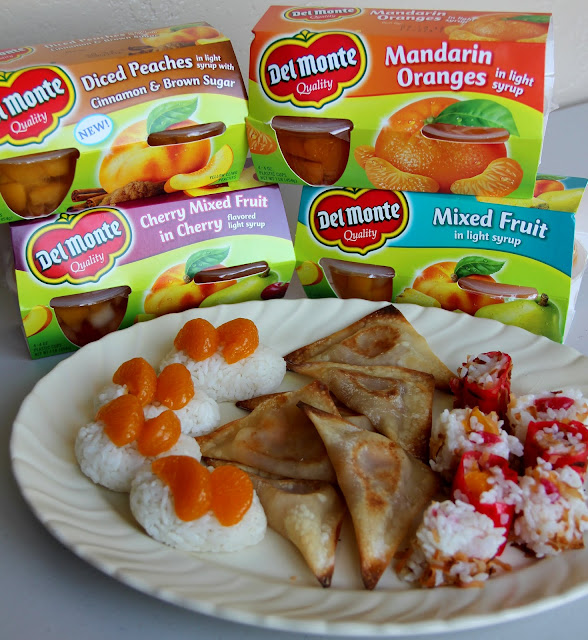 And there you have it! I let my rice cooker do most of the work, but the hands on time to make the three snacks was around 20 minutes total. It was easy, different and fun.

And what did my picky eater think? 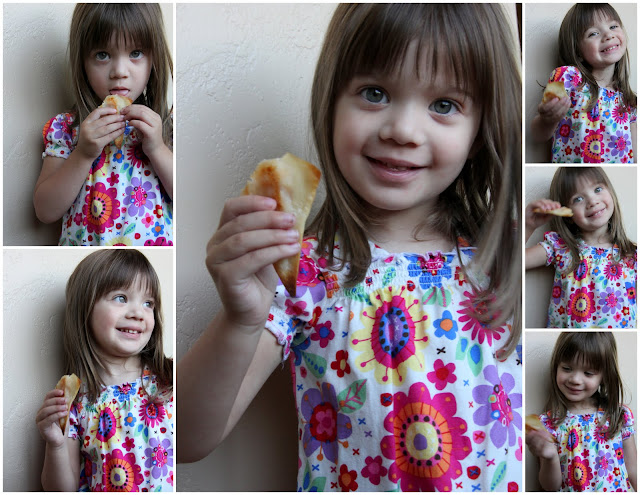 She was all smiles and loved the spiced peaches in the won-tons as well as the fun fruit sushi. So many great ways to play with your fruit, what would you make with a Del Monte fruit cup?

*Disclaimer - I am a member of the Collective Bias™ Social Fabric® Community.  This shop has been compensated as part of a social shopper insights study for Collective Bias™ and Del Monte #CBias #SocialFabric. All opinions are my own.