Is That Your Final Answer?


Plans change, but I’m absolutely certain that something wonderful is going to happen if I just show up. It’s never failed yet. 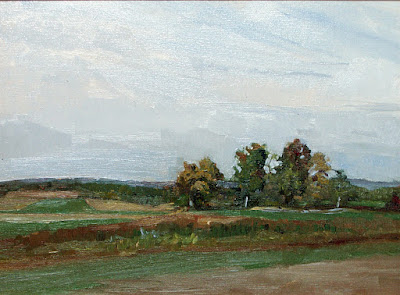 Hedgerow in Paradise, by Carol L. Douglas. It's so old it seems like a different artist.My pal Bobbi Heathstepped wrong and rolled her foot. Being in France at the time, she bandaged it and carried on, assuming it was a sprain. Yesterday, she went to her own doctor in Massachusetts and learned that she has a Lisfranc fracture. That’s a complex, multiple-bone dislocation where the metatarsal bones affix to the arch of the foot. That means the end of the painting season for Bobbi. No driving or standing for the next month.
I feel awful for her, of course. I’m also feeling a bit dislocated myself. She was coming here to paint next week. Then we were planning to travel together to Brandywine Plein Air at the end of the month. I’d happily drive and carry her gear, but Bobbi knows she can’t paint on crutches. Having tried it myself earlier this year, I know she’s right. 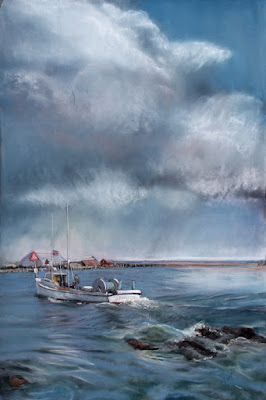 Crabbers on the Eastern Shore, by Carol L. Douglas, pastel.Meanwhile, it’s a nine-hour drive from here to Wilmington, DE, and it suddenly got much more boring. But it’s a matter of professionalism, so I’ll crank up the music and head south on my own.
Emily Post was the doyenne of good manners in my youth. She said that once an invitation is accepted, it was inviolable. You were going unless you were injured, ill, or had a death in the family. The only ‘better offer’ that got you off the hook was an invitation to the White House or to meet the Queen.
She added that last-minute cancellations were a good way to make yourself unpopular with hostesses. It never pays to be unreliable. Campbell's Field, by Carol L. Douglas. Equally old, done in Eastern PA, but more like my work today.Artists are like the AKC-registered purebreds at the dog show. Our work is actually the smaller part of the whole event, but it’s the part people see. Meanwhile, there are organizers who have been hard at it for an entire year. If possible, we should honor that.
I like doing plein airevents with my friends, but this has been a year in which my plans have been repeatedly upended. Each time, something has happened to stop them, so I’ve traveled to Parrsboro, Santa Fe, and the ADK alone. And, every time, there’s been some compelling, wonderful result that’s more than justified the trip. Furthermore, I always seem to know someone who’s there, ours being a small community of painters. 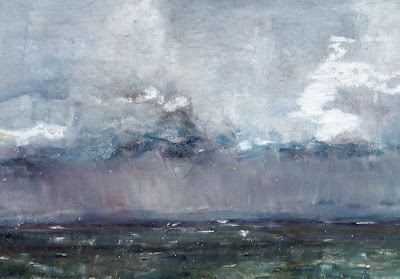 Storm at the mouth of the Chesapeake, by Carol L. Douglas, pastel.My philosophy of life is based on my faith, of course—I am not the master of my fate, the captain of my soul. I’m more of a jellyfish washed along by time and tide. Fighting the ocean is a useless, painful exercise in futility. I’ve committed to this event, so I’ll go, with or without my buddy. I’m absolutely certain that something wonderful is going to happen if I just show up. It’s never failed yet.