Ingredients:
6 (1.4 lb) fillet mignons, trimmed1/4 tsp salt1/4 tsp freshly ground pepper1 tsp olive oil3/4 lb. sliced fresh cremini mushrooms (about 3 cups)1 onion, chopped2 garlic cloves1 1/2 tsp chopped fresh thyme2/3 cup dry sherry6 (12 x 17-inch) sheets frozen phyllo dough, thawedMakes 6 ServingsPreheat the oven to 400 F. Spray a large baking sheet with nonstick spray.Sprinkle the filets with salt and pepper. Heat the oil in a large nonstick skillet set over medium-high heat. Add the filets and cook until browned, about 2 minutes on each side. Transfer to a plate and keep warm.Place 1 phyllo sheet on the work surface with a long side facing you. Cover the remaining phyllo with a damp paper towel and plastic wrap to prevent it from drying out. Spray the phyllo with nonstick spray. Top with another phyllo sheet; spray with nonstick spray, then cut the phyllo crosswise in half. Place 1 fillet in the center of the lower third on one of the phyllo stacks. Top with 1/4 cup of the mushroom mixture. Fold the short sides of the phyllo over the fillet and roll up, jelly-roll style. Transfer the Wellington, seam sides down, to the baking sheet. Repeat with the remaining phyllo, fillets and mushrooms mixture to make 6 Wellingtons in all. Spray the Wellingtons with nonstick spray. Bake until the phyllo golden and an instant-read thermometer inserted into the side of a Wellington registers 145 F for medium, 10-12 minutes. WW POINTS VALUE: 5pts.
Note: This recipe appears in the WW All-Time Favorites Cookbook. I got this book at the local library and I had to Xerox this recipe for myself. I love fillet mignon and have always wanted to try Beef Wellington. New Year, new recipes and I'm on a roll. This beef wellington recipe uses phyllo dough instead of the traditional puff pastry. My mom and I had this dish and it was the best Gourmet meal I have ever made. I was really nervous making this dish because the recipe calls for the filet mignon to be baked. I have NEVER cooked fillet mignon in the oven and I was really  nervous about the whole process. Even though the recipe says to cook the fillet mignons in a skillet, I HIGHLY RECOMMEND Broiling your meat because it will taste much juicier. I am now officially a gourmet cook. Hey all you Iron Chefs in Kitchen Stadium, you are more than welcome to come to my kitchen and Kiss this cook! 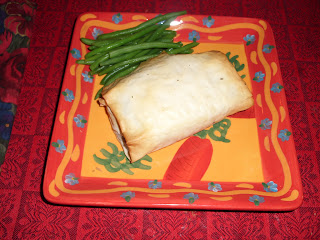