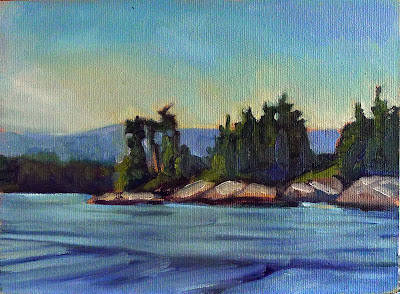 High Tide, Scott Island, by Carol L. DouglasArtists are besieged by requests for auction items. I’ve written before about how you should contribute if you support the organization’s goals, but not because you think it will give you a tax deduction.
One organization I endorse is the Maine Center for Coastal Fisheries (MCCF) in Stonington. This non-profit is dedicated to maintaining sustainable fishing off the Maine coast forever. They think this should be a three-pronged approach:
·         Preserve our diverse ecosystem;·         Assure continued access to fishing;·         Maintain profitability for community-scale fishermen.
Much of the charm of the Maine coast comes from the fishing industry: the lobster fleets bobbing merrily in small harbors and coves, colorful traps stacked on wharves or fashioned into Christmas trees in the holiday season.

Stonington Green, by Bobbi HeathThe tourist industry is closely entwined with the fishing industry. So is the landscape-painting industry. That’s especially true for people like me, who paint a lot of boats.
For that reason, I’ve contributed painted buoys to MCCF’s auction for several years. My personal favorites were the Mermaid Madonna and the Lobster That Ate New York, although the lupineand fishones probably netted the group more money. 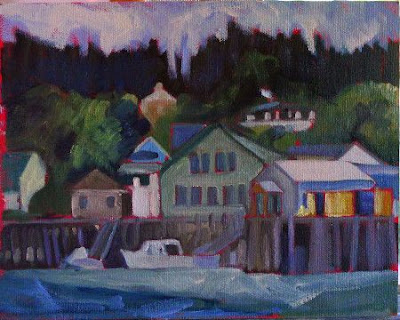 Stonington Public Landing, by Carol L. Douglas (courtesy the Kelpie Gallery)Last year, Bobbi Heathjoined me in contributing a buoy. This year, we’re both contributing again. Happily, the organization has opened the auction up to include conventional paintings. I found painting on a cylinder to be devilishly difficult.
On Friday, I delivered a painting done off Stonington, entitled High Tide, Scott Island. I did this off the deck of American Eagle last summer. It was an idyllic day, and I hope my happiness at being on the water is apparent.
I also delivered Bobbi’s painting, Stonington Green. Administrative Director Bobbi Billings recognized the house as belonging to someone she knew. That kind of validation always tickles me, and I wish Bobbi Heath had been there to hear it.
The auction will be held on August 7 at the Opera House in Stonington. For more information, contact MCCF here. 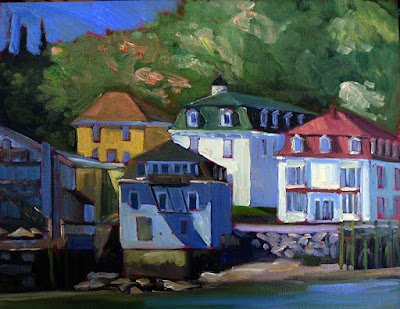 Stonington waterfront (unfinished) by Carol L. DouglasFriday was one of those days where every curve in the road elicits a gasp of delight at the wonder and glory of spring. Stonington is absurdly beautiful, but it’s also two hours from my studio. I’m lucky to get up there once or twice a summer. That has a bad effect on painting, because the pressure to choose the ‘right’ scene is immense.
I set up on the deck of MCCF’s office. It provides an iconic view of Stonington, with its repeating mansard roofs. I gave myself a strict deadline, after which I would have to be on my way. There’s a lot of drawing in the painting, and I have to adjust a roofline, but I very nearly made it. 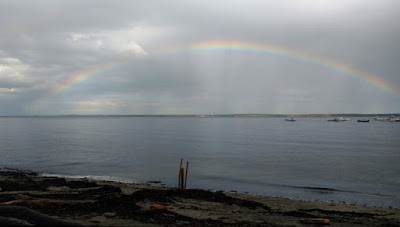 Friday's rainbow off Lincolnville.I finished in complete solitude in the limpid light of late afternoon, the tide having filled the basin that lies before the town. In the distance, I could hear a foghorn bleating. The Maine coast produces erratic weather and distorts sound, so I had no idea where it might be raining. I packed my gear and reluctantly headed west. I wasn’t much past Orland when this Spring’s ever-present rain hit my windshield in earnest.