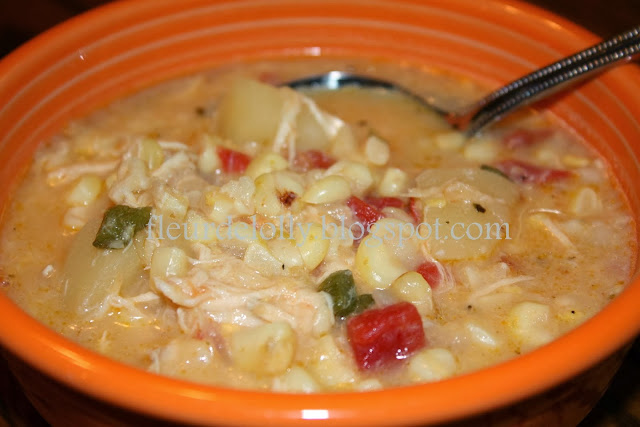 What exactly makes a chowder a chowder, and not just a soup or a stew?  Chowders originally contained some seafood, but today the definition of chowder has grown to include any number of proteins (such as chicken) and either potatoes or corn. I went with both for this recipe because truthfully I couldn't choose between them.
2 T. olive oil2 T. butter1 medium yellow onion, chopped2 small jalapenos, diced2 garlic cloves, mincedsalt to taste8 cups chicken broth3 cups potatoes, peeled and diced6 ears of corn, cut from cob1 can Rotel tomatoes (your choice on which flavor)1 t. cumin1/2 t. poultry seasoning1/2 t. red pepper flakes1 rotisserie chicken (remove breast meat and shred -- reserve remaining chicken for another recipe or for a great snack)1/2 cup heavy cream
Heat olive oil and butter in a 5 quart Dutch oven. Add onions and peppers and let cook until softened, about 5 minutes and then add a little salt. Stir well and then garlic and cook for another minute or two. Add chicken broth and bring to a boil.

Next the potatoes, corn and Rotel tomatoes join the group in the soup pot. Keep the chowder at a low boil. Add the seasonings and taste and adjust accordingly.
When potatoes are tender, remove 2 cups of the chowder to a blender or a large bowl. Puree the chowder until smooth in either the blender or with an immersion blender. Pour the puree back into the pot.
Add shredded chicken and cream and stir gently. Let the chicken and cream heat through without boiling. Ladle the chowder into serving bowls. Top with shredded Mexican styled cheese or sliced green onions if desired.
Usually I can think of a way to tweak a recipe a little...especially one I came up with on my own. This one (for me anyway) was perfect.