The Art Of Guantánamo Bay

Stripped down to its fundamentals, art is about longing. People don’t long for abstraction or polemics. They long for the sea, the sky, and freedom. 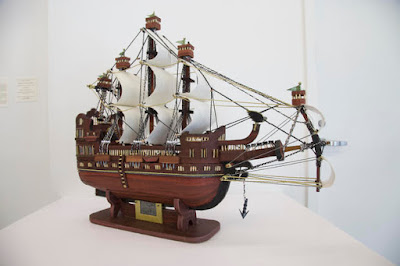 A model ship by Moath Al-Alwi, made out of cardboard and other materials he gathered in his cell, courtesy of the John Jay College of Criminal Justice.Ode to the Sea features artwork made by military detainees at Guantánamo Bay. It is on display at John Jay College of Criminal Justice in Manhattan. The fact that the Pentagon attempted to close down and destroy this work is reason enough to go see the show. Thank the Lord for lawyers.

We can also contemplate what speaks to the human soul when all other things are obliterated. That, it seems, is nature. In particular, it is the sea.
“Everyone who could draw, drew the sea,” Mansoor Adayfi, a former detainee, wrote in the New York Times. He was describing his fellow-prisoners’ feelings when tarps blocking the view of the ocean came down briefly during hurricane preparations in 2014. 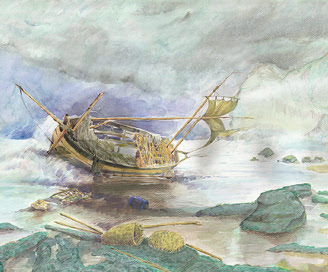 Untitled (shipwrecked boat), 2016, Djamel Amaziene, watercolor, courtesy of the John Jay College of Criminal Justice.In western art, the sea is a repository of human dreams of freedom. Ships are a powerful anthropomorphic symbol, representing both our frail human bodies and our journey through life. Apparently, these symbols transcend culture.
“I could see the detainees put their dreams, feelings, hopes and lives in them,” said Adayfi. “I could see some of these drawings were mixtures of hope and pain. That the sea means freedom no one can control or own, freedom for everyone.”
The exhibit includes work by eight artists, seven of whom were enrolled in art classes at the prison. Four have been released from Guantánamo and four remain in custody. The artists turned their work over for safekeeping to their attorneys. After fussing after the show’s opening, the Pentagon now says it will do nothing to reclaim the work on display but owns the right to destroy all future work by detainees.
“I kept asking them through their lawyers, ‘What do you want from displaying your art?’” said curator Erin Thompson. “And they all kept telling me, ‘We want people to look at our art and recognize that we’re human beings.’” 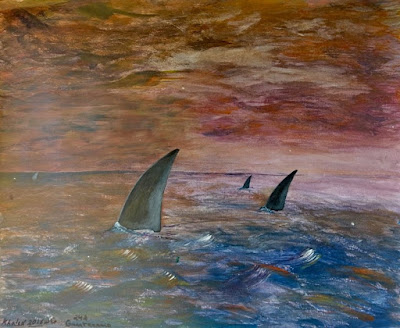 Untitled (Fins in the Ocean), Khalid Qasim, courtesy of the John Jay College of Criminal Justice.Surely that’s at the heart of all artistic expression. Beyond everything else, our work announces our presence. To destroy an artist’s work seems petty and pointless. Nothing in the work seems remotely political or capable of carrying secret messages. It was all vetted before it was handed over to the prisoners’ lawyers.
Art can be a powerful tool of emotional growth. Surely the ultimate goal for every human soul is redemption, even if that person is too dangerous to ever be released again.
Stripped down to its fundamentals, art is about longing. People don’t long for abstraction or polemics. They long for the sea, the sky, and freedom. It’s an argument for realism and for a simple vision.
The exhibit is free and open to all until January 26, 2018. The President’s Gallery is on the sixth floor of Haaren Hall,  899 10th Avenue, at 59th Street. It is open Monday-Friday 9-5 pm, except 1/1, and 1/15.