The Sea Giveth And Taketh Away


Sometimes you set out to paint one thing, only to realize it’s something else that’s caught your interest. 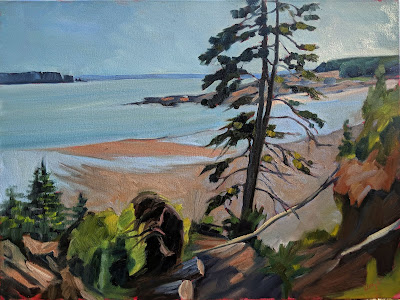 Landslide, oil on canvas, by Carol L. DouglasHad you asked me on Wednesday what I planned to paint, I’d have looked at you squiggle-eyed. I was too tired to see beauty in anything. I drove out a long dirt road to Fundy Ocean Research Center for Energy (FORCE). There is a lovely view off its back deck (and a restroom) but it didn’t move me. I returned to Partridge Island and hiked up to its observation deck. There’s a flowerpot rock on the beach below, but it seemed like too much work to drag my kit back up.

I tried instead to tackle the running tide for a third time. None of them, in my opinion, captures the powerful delicacy of the tides here.
Tides manifest as horizontal as they run back and forth along the slanting sea bed. Here the shore is flat and sandy and the tides high. The streaming water runs for hundreds of feet in a six-hour cycle. It moves shockingly fast. Still, it’s gentle. There’s no white crashing surf. 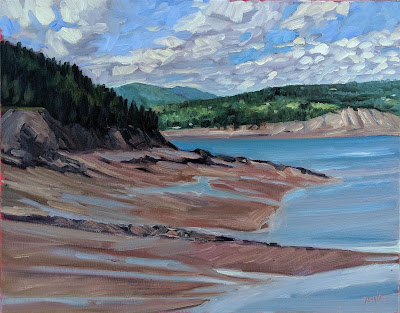 Harbor Mouth, oil on canvas, by Carol L. DouglasOn the surface, the Minas Basin is placid. However, it contains vast, uncontrolled kinetic energy. For example, the Dory Rips, off Cape d’Or, are a collision of three opposed tidal currents that slam into an underwater reef, forcing the water up into house-high standing waves. You can’t capture that on canvas when you’re looking down from cliffs ranging up to 600 feet in height.
I walked the beach at Partridge Island early in the morning, as it neared high tide. There was roiling on the otherwise-placid surface. That was a rip current. Hours later, children would play and search for fossils in the same spot, oblivious to the powerful forces that had just departed.
Partridge Island is connected to the mainland by a sandbar. It was created during the infamous Saxby Gale of 1869. This October hurricane overlapped an unusually high tide to create the perfect storm along the Maine coast and Bay of Fundy. Low-lying farms were inundated, harbors were wrecked, and breakwaters washed away. It cost at least 37 lives, and created the highest tide ever recorded, 70.9 ft, at Burntcoat Head. 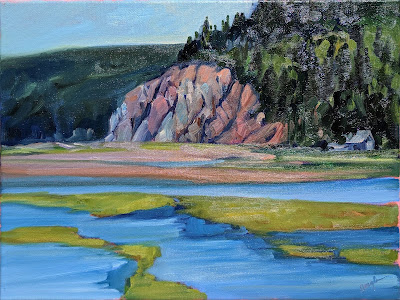 Salt water meadows (East Bay from Partridge Island), oil on canvas, by Carol L. DouglasExactly 150 years later, there are structures on the Partridge Island isthmus, including a herring weir and some cottages. It’s a popular picnic and camping spot. But that’s a blink of the eye in geological time, and it’s wise to remember that the sea giveth and taketh away.
In the afternoon, I painted in Diligent River. My instructions were to turn onto a private drive that snakes three kilometers down to the sea, running first through blueberries, then meadows, and then a spruce forest. There’s a freshwater pond of about 15 acres. It’s high because of our endless rain this spring. The dock is several feet offshore. Half of it has loosed its moorings and sailed away. 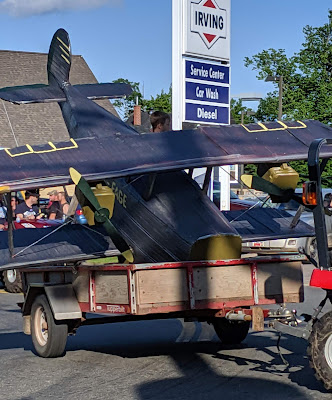 Parrsboro had a parade this week, and I could have been in it had I answered my phone. This float commemorates the forced landing of a Handley Page V/1500 named Atlantic here, on July 5, 1919. It was lovely, but the coastline compelled me. A break has been created in the trees by a spring mudslide. I’d intended to paint Cape Split, but the glorious tumult of rocks and upended tree trunks caught my imagination. Through it, ferns slid to a new destination unharmed. Spruce saplings grew on, unheeding.
The cliffs here are an unstable amalgam of sediment and basalt. They’re always in motion, slipping down to be milled into new sand beaches. Since these are some of the most important paleontological areas in Nova Scotia, new fossils are always being exposed. Inevitably, that interested me more than the view, and I found myself painting something I’d not intended.
I was invigorated. Three large paintings in two days when I thought there was no gas left in the tank.