Part 2 can be found here.

At this point, the Pagoda is very sturdy, mostly together and I admit that I wasted one night moving figures around on it making ninja noises in the basement. Pretty damn exciting for me. The wife probably died a little inside.

The instructions have the doors either glued open or closed. The doors themselves are 2 parts, a front detail layer of laser cut grey board and a backer to make it rigid. I wanted two things with these doors: 1. keep the detail to let light through and 2. Make them movable. 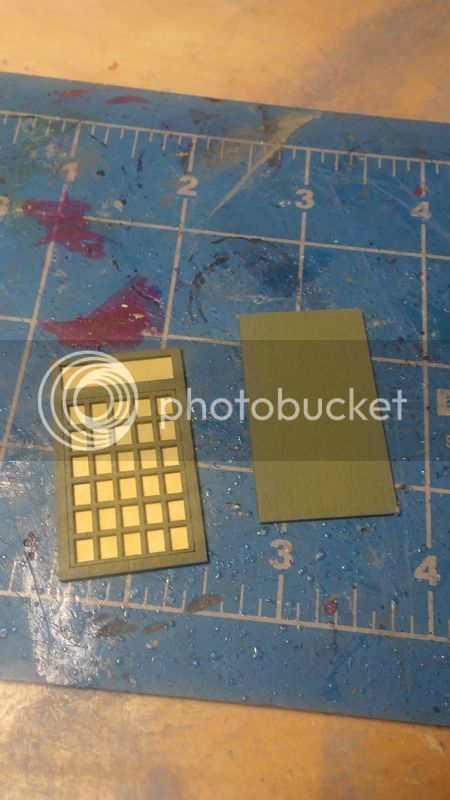 First I tackled the detail/light issue. That was fairly easy, I simply backed the painted detail layer pieces with parchment, glued with matte Mod Podge and left the original second backer off. Sorta flimsy but ok and beautiful with lights showing through.

Then I spent another night finding a way to make the doors move. I prefer a more forgiving design when it comes to making 6 sets of doors movable.

I finally settled on a design where the door hangs via a metal track on the wall, and a magnet attached to the door, allowing the doors to move around and also simply detach when gamer hands smack around inside the buildings.

My design was mostly because I could source all the parts from what I had laying around and reproduce it over 12 doors. The tracks were size 2 jeweler's saw blades, tooth-down, which happen to perfectly span the width of the walls, sorta like a lintel. I used Mineral Spirits to de-grease the blades and then used, you guessed it, matte Mod Podge to glue down the tracks.

I cut a length of the backer to lag over the top of the door and leave a space for a flexible magnet. Getting them all together only needed some trimming by eye to get the magnets on top of the door flush and square. Flexible magnet ribbon is best for this, about US$3.00 from the DIY. I just had to use Mineral Spirits to get the adhesive off for the super glue to adhere.

So that's it for the doors! The lights are simply flickering LED yellow lights from Amazon placed around the inside of the Pagoda, keep it simple.

Then I weathered the roof but you see it too much in the pics. It warms the grey sufficiently so it looks good next to the trees and such.

I then set about making some planters of flowers using wooden bobbins primed grey and weathered a bit after drybrushing greys to off-white, Woodland Scenics green sponge and flower flock.

So that is pretty much it for now. I plan on detailing the inside of the pagoda at some point, especially after I get a few games in with it.

Up next: GLAMOUR SHOTS and final thoughts