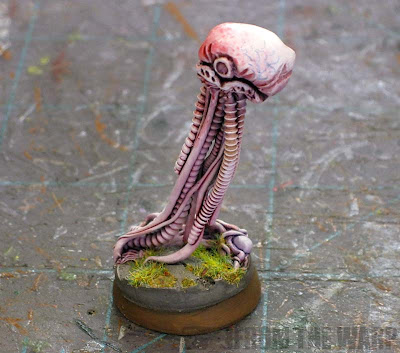 I'm not sure how I ended up choosing a Tyranid Spore Mine to be the first model I sculpted from scratch using nothing other than greenstuff. Maybe because it's fairly organic and that gave me lots of room for error since I've never done this kind of thing before.

Maybe it's because I got my hands on a few "tube makers" a couple of months ago and this seemed like the perfect excuse to use them on a real model.

So how exactly did I build it
The idea to build this guy came from wanting to use the tube tools I'd looked over a few months ago (Green Stuff Industries and Masq-Mini). Once I decided I was going to build one of these, it became a no brainer to put it on a suitable Tyranid infestation themed base as well. It looks cool and I need all the help I can get to improve the look of my sculpting. I picked some of these up from Secret Weapon Minis a long time ago and they've been patiently sitting in my bits box waiting for this day. I knew I'd use them someday, I just didn't know when. It's already partially covered in tentacles and bubbles and junk. Perfect.

I started by drilling a hole in the middle of the base and adding a brass rod (in this case a heavy duty paperclip) for the structure of the model. The top is bent over horizontally to add some stability to the creature bulb on top. As I've been sculpting things over the past few weeks, I've taken my extra bits of greenstuff and set them on the rod. This has helped me build up the bulb over time using left over greenstuff.

Once I had enough built up, I added one more layer over the top to finish off the shape of the bulb. Using my sculpting tool, I cut some organic shapes into it, added a ruffle around the bottom for the tentacles to hang from and tried to make it look the part.

I suppose if you were looking to do this for real, you could sculpt your bulb separate from the model and then cast it with a two part mold. That would allow you to make a number of these quickly depending on how many you needed. I don't know how many Tyranid players use these or how powerful they are in the game. 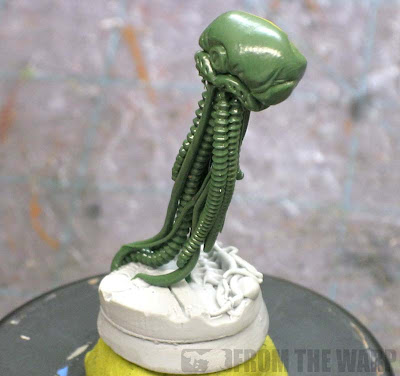 Making the tentacles
This way the most fun. Using my two tube makers and tossing in a few rolled lengths of greenstuff, I kept making tentacles and attaching them to the bottom of the bulb until I had what looked like a good amount. A very scientific approach as you can see.

I did try and maintain a balance between the bulk hanging from under the bulb and how big it was. I wanted them to look like they were the right amount for that size creature. Like I have any idea how many that should be.

The painting or a modified Leviathan paint scheme
Being the creative person I am, I opened the Tyranid codex and looked for a good paint scheme for this guy. I settled on something that could be taken for hive fleet Leviathan. I primed my model white and used a series of washes to add the color to the model. Mainly Baal Red and Leviathan Purple. I did add a small touch of Gryphonne Sepia under the bulb for some color variety.

I thinned out some GW Regal Blue and added a few veins along the sides of the bulb as well. Something to break up the huge blob of white up there.

The base was painted light grey, given a wash of thinned GW Charadon Granite and then drybrushed with Dheneb Stone. After looking through the codex, I decided I would try to mimic the early stages of the infestation where the planet life was flourishing prior to being consumed by the arriving wave of bugs. A little bit of grass and some ground turf sprinkled into the cracks of the sidewalk worked perfectly for me. The standard Graveyard Earth trim finishes off the base and gives it that official look. 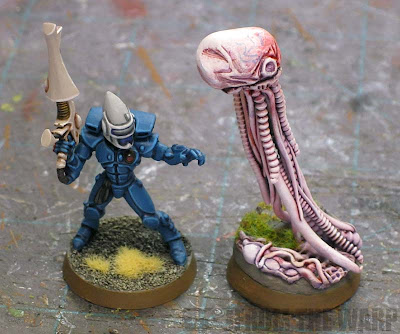 As far as scale, this guy is much bigger than your regular GW spore mine but much smaller than the Forge World version. Maybe the Forge World thing is completely different... I know it looks the same though. This version stands just a bit taller than your regular 25mm base troop. Makes him a bit more imposing I think and he appears a little more dangerous than he really is.

All in all, this guy was a blast to build. Being as organic as he is, I didn't have to worry too much about getting things perfect. Not counting the build up time to get the bulb the right size using left over greenstuff, you could build one of these in a day fro start to finish easily. I think the larger size works better too.

Make sure to check out these posts as they might help:
Green Stuff Industries Tentacle Maker review
Masq-Mini Ultimate Tube Tool review
FTW collaborative Post: Inside the Hive Mind, everything Tyranid